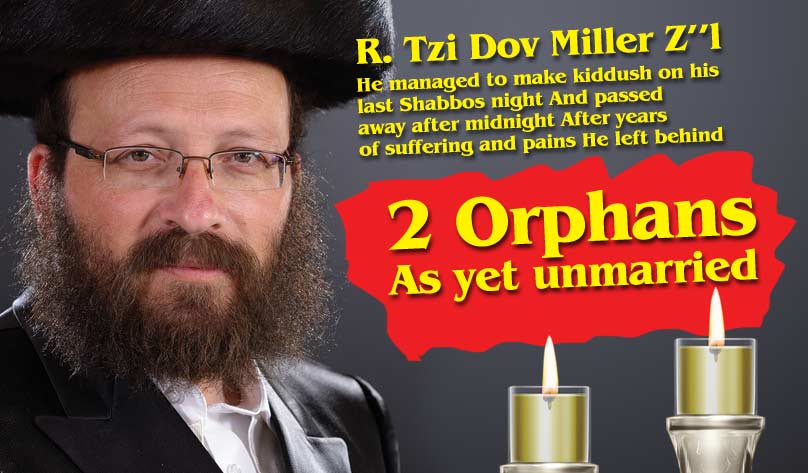 On his last Shabbos, at 2:00 AM, while sleeping, R. Tzvi Dov Miller returned his soul to its Creator.

The door is open. The neighbors are going in and out. The Rov arrives. A seminary girl who just became an orphan. A fresh widow who is dazed. The Rov instructs the married son to daven for the niftar in shul, since there is no aveiluson Shabbos. He recites Kaddish Yasomfor the first time in his life.

Until Motzaei Shabbos, the niftarwas still at home, and little by little the bitter reality drips into their minds.

How could it be that Tateh passed away suddenly? Suddenly! Yesterday he was here, he set up the hot plate for Shabbos. His Gemaros are still on the table covered with a white tablecloth. Warmth from the loving touch of his hands. They give off the fragrance of Tateh.

How can it be that he lies in his bed, on which he went to sleep in the middle of a sugya with intention to continue learning in the morning – but his neshamahis no longer here?

There is an empty space now. An incomprehensible vacuum. The mainstay of the home. Tateh who supported them and was responsible for them is no more. In one moment, all the responsibility fell on the widow’s shoulders.

The pain and the shockare now joined by the debts. Another $10,000 from there and another 40,000 shekels from here and 200,000 from somewhere else. Suddenly the wife, who relied totally on her husband, who took care of her home with devotion and love, must now deal with giant sums.

It is impossible for her to do it alone. No matter how much she might want to, there is no way for her to pay back debts or earn what is needed for the marriages of the remaining children. Also before the tragedy, their monthly income was not sufficient. And now?

Tzedakah saves even from death. We will come to the poor widow’s assistance at this time, and HaKadosh Baruch Hu will protect us from all misfortune, midahk’negedmidah.