A Thousand and One Reasons Why I Chose Vaad Harabbanim

Another year of good deeds just went by. A year with so, so much tzedakah, tens of thousands of Vaad Harabbanim’s poor people,whom the Jewish people supported.
Another year that you were fortunate to be a donor.
But why?
Why did you give?
We decided to just go out and ask the people. We presented the question to the public, to find out why people do it.
Why should a Jew decide to give his tzedakah of Yamim Nora’im, or of Matanos l’Evyonim, or of Kimcha d’Pischa, or the 104 monetary units of Rav Chaim Palagi on Erev Shavu’os – specifically to Vaad Harabbanim? 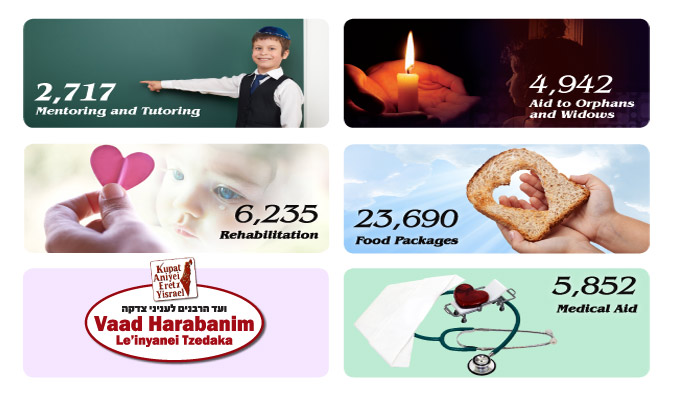 Meir described how he went to borrow a ladder from the upstairs neighbors, and found a home that was empty, totally empty! Two weeks before Leil Haseder!
A nine-year-old girl with baggy socks opened the door and behind her was a floor flooded with black water.
Meir choked from the smell.
The mother, blushing and apologetic, rushed to the door. “Sorry, we have a plumbing issue. How can we help you?”
“Did you call a plumber already?” asked Meir, instead of answering her question.
The mother blushed more deeply this time. “My husband will try to fix it…”
His eyes were suddenly pricked by the sight of the paint peeling on the walls, the mismatched chairs around the table, the heater that wasn’t on… it looked like a very impoverished home indeed.
“How are you doing with getting ready for the chag?” Meir asked again. He is not the nosy type at all, but he felt it was a very important question.
The mother glanced over her shoulder, made sure the children were out of earshot. “We’re waiting for a miracle.” she whispered.
So he wasn’t getting worked up over nothing!
Meir called Vaad Harabbanim the same day and asked for urgent help for the neighbors on the third floor. The angels of Vaad Harabbanim brought them an envelope with a big check that covered the plumber and also a nice shopping trip, including matzos, chickens, fish and groceries for all of Pesach.
The clean and bare fridge filled up with food products, and along with it, 6,234 other fridges filledup in the homes of families in distress, thanks to the Kimchad’Pis’cha that you donated.
Before Pesach began, Meir set up regular monthly payments for two years to Vaad Harabbanim, out of a feeling of mercy and responsibility to his neighbors and to tens of thousands of needy families in Eretz Yisrael.

The Mitzvah of Saving Lives

The neighbors walk past R’ Aharon and whisper “Shalom” in a low voice. Some of them ask how they can help. The neighbor who gets things done speaks to Vaad Harabbanim, with bated breath. Can they mobilize $250,000 by tomorrow?
Yehudah, oldest son of R’ Aharon, collapsed while learning with his chavrusa in mesivta. The medical tests clearly showed a malignant tumor next to the brain, and the operation must be done within a week at the very latest.
And it costs $250,000!
Vaad Harabbanim held a feverish emergency campaign. The gabba’ei tzedakah went with the brochure to the shuls and kollelim, the batei midrash and everywhere possible. The Jewish people showed itself in its full glory and within two days they mobilized $250,000 to save his life!
Yehudah was flown abroad, went through the operation – and his life was saved, baruch Hashem, like 5,852 other ill people who received life-saving medications and treatments thanks to your donations.
“I now donate much more to Vaad Harabbanim,” admits R. Aharon, with a spark in his eyes. “I, too, want to save lives, like the Jewish people saved the life of my son…”

As soon as three stars appeared in the sky the phone rang.
The children dashed to the phone with bated breath. They already knew that Mother was very ill and any day could be the end. Maybe it’s Father calling from the hospital?
Aunt Chavie said baruch hamavdil, answered the call, and her eyes immediately filled with tears.
She couldn’t bring herself to look at the faces of her nieces and nephews. Four orphans, the oldest of them ten years old, so young… “Your father is coming right away,” she said, and ran into the bedroom to cry and cry and cry.
“We must get ready for the day after,” said Uncle Avraham on the first day of the shivah. “Since her sickness, giant debts have been piling up, and also the salary of the deceased is not going to come into the bank account anymore…”
Uncle Avraham turned to Vaad Harabbanim and the dedicated gabba’im got involved. They set up a proper fund, enlisted more donors from the community and the extended family and other kindhearted Jews.
For Chavie’s nieces and nephews, like for another 4,941 orphans among the Jewish people, a comprehensive and stable support plan was built for the coming years. With Hashem’s help, they will grow up and lead successful and happy lives despite their orphanhood.
Since then, Chavie honors every brochure about orphans that comes in, and donates a nice sum. She knows from personal experience how critical this is. 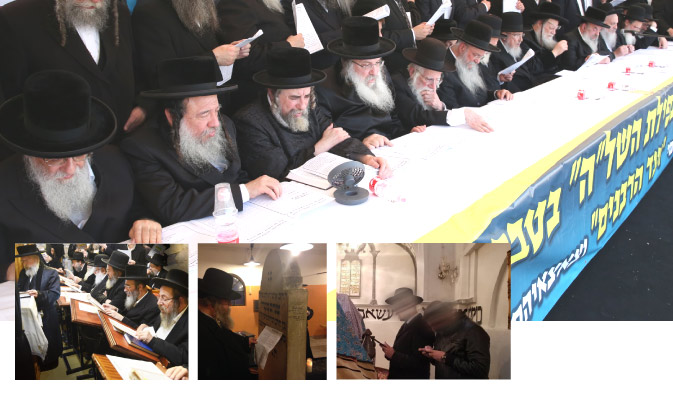 Tens of thousands of Jews donate so they will be included in the Tefilah sessions that the Gedolei Hador hold for Vaad Harabbanim’s donors.
“My son’s marks in yeshiva took a noticeable turn for the worse over the course of the past year. In addition, he acted up in class and was punished repeatedly”, writes Mother. The signs of tears are visible on the page. “I davened so much, I cried so much… we put double energy into Daniel since he was born, and the difficulties were without end…
“On Erev Rosh Chodesh Sivan, when the boy already had one foot out of Torah learning, I donated, so the Tzaddikim will daven for him at the tomb of the Shelah Hakadosh. We saw results fast… it was simply unbelievable!
“The following Motzaei Shabbos my husband asked Daniel’s eighth-grade rebbe if he could speak with him. They talked until late…
“In the morning Daniel announced that he has decided to make an effort, to put energy into learning and be successful.
“Now I cried from excitement…”
The Gedolei Hador exert themselves and go out of their way to daven for Vaad Harabbanim’s donors. They pour out their hearts in prayer during the 40 days of Rachamim and travel to the Kosel Hamaaravi four hours before Rosh Hashanah. They include us in their Ne’ilah prayers and on Hoshana Rabba, that we should merit a Shanah Tovah.
They daven for us on 11 Cheshvan at Kever Rachel, on Chanukah at hadlakas neiros, and on the final day of Chanukah – Zos Chanukah – in the special group of Kohanim Talmidei Chachamim who enter the Kosel tunnels to stand next to the Kodesh Hakodoshim.
On Tuesday of Parshas Beshalach they recite a special tefilah for parnassah; on Taanis Esther a minyan travels to the tomb of Mordechai and Esther in Iran.
On Purim, which is like Yom Kippur, we are mentioned by the Gedolei v’Tzaddikei Hador, and on Erev Pesach, Rav Chaim learns the Iggeres of R. Shimshon of Ostropoli for us.
All of chol hamoed Pesach, the tefilos continued, and on the night of Shevi’i Shel Pesach there was a special tefilah held in Amukah.
On Lag Ba’omer they prayed for us by R’ Shimon bar Yochai, and onErev Rosh Chodesh Sivan by the Shelah Hakadosh, that we should have nachas from the children. On Erev Shavu’os there was a special Tefilah session at the Beis Hashunamis, for childless couples, and at Krias Hatorah on Shavu’os there was a special tefilah for refuah and good health.
Myriads of donors had the merit of their names being mentioned in these tefilos this year, and myriads will continue to have this merit, b’ezras Hashem.

To See Yeshu’os With Your Own Eyes

Miri donated 180 shekels to Vaad Harabbanim before she went to an operation with her mother. Mother wasn’t so young anymore, and every surgical procedure at her age was a significant risk.
When they got to the hospital, right after the last X-ray, before entering the operating room, the problems began.
“Are you sure this is your X-ray?” The doctor shifted his glance from Mrs. Basya, who was eighty, to her daughter Miri. “There is a mistake here. Go back and get another X-ray done.”
“But we have an operation scheduled in another half-hour,” says Miri anxiously. “My mother has a bolt that moved out of place from the operation on her leg two years ago. And now…”
The doctor cut her off. “I know. But the X-ray you brought doesn’t show any bolt that is out of place. Apparently, it got mixed up with the X-ray of another patient. Go back to the X-ray room.”
They go back there, and Miri sighs. She donated to Vaad Harabbanim, and even so, they ran into problems. Hashem knows what is best for them.
They return to the doctor with the new X-ray. Mother sits down in the chair and closes her eyes; she is tired out.
“I don’t understand.” The doctor is truly confused. “It’s the same thing again… The bolt is in exactly the right place. Who told you to come for an operation?”
He looks around in the computer. “This is amazing! Something changed since the last X-ray, Mrs. Basya. You can go home. There is no need for an operation!”
Yes, it is amazing, like many other thousands and thousands of amazing miracles that come in all the time to the offices of Vaad Harabbanim. Jews donate in order to see yeshu’os, and true miracles happen. Tzedakah rips up the evil decree, smooths the way, returns lost objects, opens the gates of parnassah, settles quarrels, finalizes shidduchim…
A downpouring of varied yeshu’os, in every area you can imagine.
I pledged, I donated, and I saw a yeshu’a!

Simply To Give Tzedakah In The Best Way Possible

hlomo, who is the last person who was questioned for this article, donates for the simplest reason in the world. It is so basic, so Jewish:
To fulfill the mitzvah of tzedakah in the best possible manner.
“This is the tzedakah fund that the Gedolei Hador stand behind,” he explains. “They oversee it and direct it, they donate to it themselves… I looked for a proper place to donate my Maaser money, and the natural address is the tzedakah fund of the Gedolei Hador.
“That’s all…”
That’s all. It’s so simple, and so moving: your tzedakah goes together with that of the Gedolei Hador. It is in their merciful hands, under their pure and dedicated management.
You, too, donated last year to the poor of Vaad Harabbanim, and not just once or twice.

Why did you do it?
What motivated you?
We would be happy to hear…
And throughout the year, dozens of letters telling of yeshu’os come in every day.