Sinai Here, And Now, Medical Miracles On Shavu’os At The Reading Of Aseres HaDibros - Vaad harabanim

Sinai Here, And Now, Medical Miracles On Shavu’os At The Reading Of Aseres HaDibros

On 11 Tammuz 5779, the Rebbe of Vizhnitz shlita went to the home of Moreinu Sar Hatorah Harav Chaim Kanievsky shlita. This was back when people could still meet one another, and the two Gedolei Hador together issued a joint, special request to save the sick people supported by Vaad Harabbanim.

They composed a joint statement, and promised, with a rare berachah, that all who donate to help the sick people of Vaad Harabbanim will be saved from all sickness – they and their families!

A little more than half a year later, the coronavirus pandemic broke out, and this vital berachah of the Gedolei Hador became critically important.

The biggest fear used to be cancer, lo aleinu. When Rav Chaim and the Vizhnitzer Rebbe blessed the donors with health, we didn’t even dream about a plague like in the Middle Ages. When world powers are helpless against a microscopic virus, the blessing of the Tzaddikim takes on another dimension. 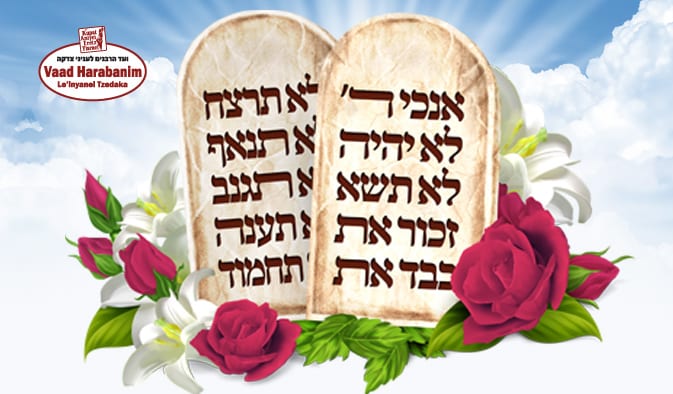 Now, for Shavu’os 5780, the promise of the two Gedolei Hador will be joined by an ancient, two-thousand-year-old promise from the time of Matan Torah. A tremendous, miraculous healing power will descend into the world in a few days.

The Jewish people left Egypt after two hundred and ten years of bondage. A wounded, oppressed people of slaves, deaf from whiplashes falling on their ears, missing limbs, blind, suffering from intestinal illnesses due to poor nutrition and starvation. Some of them went insane from seeing the babies and children placed between the bricks and covered over with mortar.

And now, Hakadosh Baruch Hu wishes to give His people the Torah.

But to what kind of people?

It is stated in the Seforim Hakedoshim that at Matan Torah, the Jewish people became the King’s legion. And it is not fitting for the King’s legion to be crippled and maimed. So Hashem sent the angel Michael to heal them all.

Like it was then, so it is every year when Aseres Hadibros are read from the Sefer Torah. A heavenly breeze of Refuah Sheleimah wafts through the world. Health and strength for Avodas Hashem…

This is what Moreinu Posek Hador, Harav Hagaon Yosef Shalom Elyashiv zatzal revealed : At the time of the Torah reading of Aseres Hadibros, we can ask for Refuah Sheleimah for all kinds of illnesses – even those that have no natural cure at all!

People stayed up for a night of learning, and the letters ascend and fly up from the Sefer Torah. At Matan Torah, the world was silent, the voice of the shofar grew stronger and stronger – and the GedoleiHadordaven for you that you should be strong and robust, just like then.

Gedolei Yisrael stand at the Sefer Torah, a holy silence fills the shul, the hasmadah of a whole night blazed the way – and there ascends the Tefilah of Vaad Harabbanim’s donors! To give them strength and vitality, to protect them and heal them!

Possibly, we will be back inside the shuls by then, maybe there will be minyanim in yards and porches, and the Sefer Torah will be opened in the crisp air among daveners keeping a safe distance. However it will be, the Gedolei Hador will daven for you then. In front of the Sefer Torah open to Aseres Hadibros, at the time when the power of Matan Torah’s healing descends into the world.

Just like at Matan Torah, also now we can merit a Refuah Sheleimah! A complete recovery even when all the test results say otherwise. Is there a health issue that is too much for Him? Hashem can heal a suffering soul, no matter what ails it.

The Gedolei Hador will daven for you, for your children, for your parents! The mash’chis is stalking the streets, a dangerous virus is shaking up the world and exacting heavy tolls – and you are protected!

We are in the midst of a bad dream. People wearing masks and gloves; it sounds like a wild fantasy. But now it is the reality of our lives.

And in such a reality, the berachah of the Gedolei hador is the only sure option. With the healing powers of Matan Torah, with tzedakah that saves even from death – this is the proven antidote for coronavirus, and in the meantime, the only one.

One donation can save us. Just give tzedakah. Money that will go to buy medications for the sick, provide life-saving treatments, critical assistance for families destroyed by coronavirus. This money will purchase medical equipment for a crippled child and will buy food for a poor family in isolation.

Your money will help the sick among the Jewish people – and you will merit, midah k’neged midah, to be blessed with Refuah Sheleimah and robust health!