The Chesed that accompanies the children - Vaad harabanim

ראשי » חדשות ועד הרבנים » The Chesed that accompanies the children

The Chesed that accompanies the children

Children come on the first day of school neatly dressed and excited about the new school year, but there are some who have no one to iron their clothes for them.

Kids are chatting nervously wondering about their new teachers, but there are others who are embarrassed, sitting there with empty pencil cases.

Does it interest anyone that their father is being fed through a feeding tube and the doctors are trying to convince their mother to send him to an institution?

Who cares about covering his books with wrapping paper when his brother was crying all night in pain, his mother and father holding him and crying along with him?

Thousands of our children are beginning the new school year and your donation to Vaad Harabbanim will help us supply them with notebooks and put writing utensils in their pencil cases.

They want to be like everyone else and that’s where we come in.

Father is screaming again in Farsi. Shmuel covers his head with his blanket, but it doesn’t muffle the piercing sounds. Terrifying, tortured cries.

“Mordechai,” he calls to his brother – maybe he is still awake. Mordechai opens his dark eyes and extends a hand. They try to comfort one another.

“Abba doesn’t understand that we are in Israel?” asks Shmuel, “There are no dungeons here!”

Shmuel and Mordechai were so little when their father was abducted and taken to the Iranian prison. Their older siblings told them stories of the days when he was strong, the skilled manager of his own successful business, with local merchants lining up at his door.

But the father who returned after years in prison was a shell of a man, staring at the wall, his body scarred by the many blows he suffered. There he sits, day after day in the corner of the big room, murmuring to himself unintelligibly and periodically bursting out with the howls of a trapped animal.

“They killed him,” cries their mother. “They left his body and took his soul.”

She fled Iran, to come to Eretz Yisrael hoping to forget everything that they had gone through. Perhaps the change would restore their father’s soul…

They crossed border after border, carrying the few possessions they had managed to smuggle out. Their father remained silent the entire way.

But coming to Eretz Yisrael helped very little. Father continues to scream at night and sit in silence during the day. Mother works a bit as a cleaner, but there is never enough money.

Father doesn’t know that the new school year has begun. He doesn’t even know what day it is. Mother is an immigrant. She doesn’t know the language nor is she familiar with the mentality; and everything is awfully strange. She had thought that it would be easier in Eretz Yisrael, but disappointment eats away at her every day.

Our donation for Shmuel and Mordechai will enable them to make a fresh start this year. We will make sure they have a sandwich in their bag and hot food for lunch. They are among Jews now, and Jews care for one another.

“Refuah Sheleimah…!”, the sweet voices of a boys’ choir sing into the phone.

R’ Chaim Meir smiles wanly. He doesn’t have the strength to hold the phone. It’s difficult for him to speak.

He wishes his precious children a good night and tells them to wake up early and run to cheder.

But in the morning instead of running to cheder – they attend a funeral.

For four difficult years, R’ Chaim Meir was ill. The tumor grew and then went into remission. The children were tossed between hope and despair.

This is a home built on chesed; in addition to the eleven biological children there are two orphans who lost both their father and mother. And now they have been orphaned for the third time.

Summer vacation comes and they are not finished weeping yet – as if one could stop crying over the death of a father. Mother tries to pick up the pieces, but the pain is unthinkable. After four years on a rollercoaster no one remembers what it means to have a routine.

Exactly one month after their loss, summer break begins. How does one manage in a home with 13 freshly orphaned children? Any trip would cost hundreds of shekels; the cost of the simplest treat, a popsicle, or a slice of pizza, is multiplied 13 times…

“Abba loved to take us to swim in the yam…” The children recall their father, and the tears return to their eyes. No one wants to go on a trip. The sea doesn’t interest them; they only want their Abba back.

The month of Elul is approaching. The boys need some new clothes, socks and T-shirts. The fifteen-year-old daughter wants a new bag for school. Her little sister doesn’t have decent shirts to wear, and their mother doesn’t know what to do. Every day she promises her children that the next day they will go out shopping for the new year, and when they aren’t looking, she pleads with Hashem that He should send her a yeshu’ah.

The envelope from Vaad Harabbanim will push away a bit of the darkness, bringing new strength and energy to the broken widow and her orphaned children.

Thirteen orphans will start the year on the right foot because you cared enough to help. 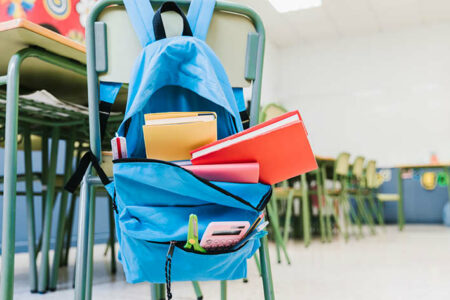 A group of ragged-looking children knock at the door, “Can we come in?” they ask.

Edna sighs. They have come back again – poor things. “Did your mother come back from the hospital?” she asks. “Yes,” they answer, “She is sleeping.”

Edna lets them in, and they immediately gravitate to the kitchen. She sees the hunger in their eyes, hunger for good, hot home-cooked food. The little three-year-old is scratching at her head. To clean the lice out of those pretty curls will need a serious effort, but Edna sees no other choice.

“We have to help them,” she tells her husband when he comes home in the evening. “Maybe we can ask Vaad Harabbanim or the organization that helps mothers after birth to send a cleaner… A mother who suffers from serious diabetes is at least as needy as one who gave birth, is she not?”

So, they have come under our care. These are our children, whose mother’s condition is deteriorating rapidly and whose father can barely scrape together the money necessary for treatments that relieve her tremendous suffering.

The family never knows when Ima will be going back to hospital. They never know whether the laundry will be done, and they will have clean clothes. They sleep on sheets that haven’t been changed in months and they hear their mother weeping over her own condition and over her children.

These kids need to start the year, too. Somehow, they, too, will be moving up to the next grade; first grade, third grade, seventh grade and kindergarten.

We reach out to them too. Come, let’s embrace them with love, stroking the cheek of a worried child and promising him that we will do everything necessary to allow him to grow up normally, with Hashem’s help!

Noah, Gavriel, Yehuda, Milkah and Effy were living a normal life until very recently. Their mother listened patiently when they spoke to her, sharing their stories. Every morning their father prepared a drink and a sandwich according to their personal requests.

Effy overslept one day. His father prepared an extra sandwich, “You need to be strong!” he laughed, lifting him up high. “Do you hear me?”

But it was no joke. Effy fainted in kindergarten; the astonished teachers called an ambulance and very quickly his parents were thrown into a maelstrom of blood tests and examinations.

His golden curls have fallen out; his fingernails are black, and he seems to be wilting away before our eyes. Ima quit her job so that she can take care of him. She comes home at the end of a long day at the hospital and Abba takes her place at Effy’s side at night. Savta comes to help, and the rest of the children miss their brother terribly.

“We want to visit Effy,” they beg Savta.

They come to the children’s oncology ward, and they are shocked to see their sweet little brother weak and bald. The happy drawings on the walls don’t succeed in dulling the anguish in the air.

The frightening image of Effy does not leave them. They sit in class wondering about the IV needle stuck in his arm; they remember the strong smell of the medicines and they hold back their tears.

The summer holidays pass somehow. Friends and relatives take them out. Every night they sleep in a different bed and their belongings are scattered about in the homes of the extended family.

And what will be when the year begins? Who will help them get ready for school? Who will buy them what they need? Who will pay?

A year ago, they began with excitement and joy. Ima made everything happen, as usual.

This year it is a completely different story. Ima is not working and the little money they have goes to the expenses of taking care of Effy. There is no time to mull over whether to buy a Hello-Kitty schoolbag or one with pictures of butterflies.

But we are here for them!

For Noah and Gavriel, for Yehuda and Milkah. For the children who fled Iran with a disabled father, for orphans and all the other children of Vaad Harabbanim.

We go out to shop for our own children – and we have them in mind as well.

We fill up a cart with necessities; magic markers, highlighters…

And we add another ten dollars for the children of Vaad Harabbanim.

At home they have so much pain, distress, poverty, and tears.

We are here for them!