Together we shall go following Rabbeinu Chaim Kanievsky zatzal

We lost our father.

On Shushan Purim, the lights went out, and the mourning was strongly felt in Vaad Harabbanim.

Harav Chaim Kanievsky zatzal – how painful it is to write about him that way. Our fingers are so used to typing “shlita.” Rav Chaim accompanied Vaad Harabbanim with such mesirus nefesh, with such love!

Erev Pesach last year he read for Vaad Harabbanim’s donors the Iggeres of R’ Shimshon of Ostropoli, and it was obvious that this year, too, we would have him to daven for us…

Rav Chaim ascended in a storm to the heavens. The Jewish people is orphaned, but not lost. We know exactly what we need to do right now.

This is how the Rabbonim rule after the passing of Moreinu Sar Hatorah, Rav Chaim zatzal! 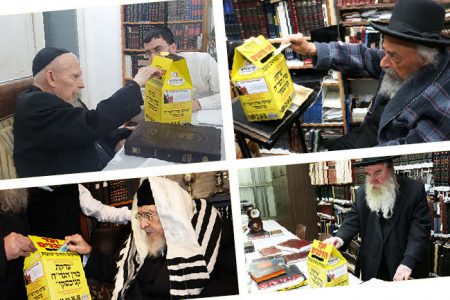 The Gedolei Hador have set up a fund as an ilui neshamah for Harav Chaim Kanievsky, to continue providing life-giving support to the impoverished Jews that Rav Chaim himself was so devoted to. To keep up and maintain the great tzedakah work of Rav Chaim zatzal!

What does “Pesach” mean to you?

There are people to whom Pesach is the smell of cleaning and renewal. Others think of all the mess, of a house upside down and stressed out on Erev Pesach. Some close their eyes and imagine the special taste of Pesachdik nut cake.

And there are some who don’t want to think of Pesach. At all.

For struggling families, every holiday is another nightmare. Life is unbearable even without extra projects. The regular daily routine is full of pain and suffering from wall to wall. Where will they get the strength to clean the house, when Father has been hospitalized for two months straight, and every time the phone rings, their heart drops – maybe now they are calling them to the hospital for the final visit?

Who will dress the children in decent holiday clothing in a home that was suddenly orphaned? Not long ago a devoted and hard-working mother’s radiance was still shining on them, who knew how to get beautiful clothing and shoes from clearance sales. Despite the poverty, the kids always looked good and well taken care of.

One morning she didn’t wake up. Father is happy she is catching up on some sleep, gets the children organized himself, and then leaves the house, too, and only when he comes back in the afternoon – he understands that Mother wasn’t just sleeping.

Shortly before Leil Haseder, the Shloshim will be up for their mother. Who will clean this house for Pesach? Who will order potatoes and onions and wine and matzos, and how will they pay?

How much does Pesach cost you? There are endless purchases: shoes, clothes, socks, a broom to replace the one that broke, new baskets to organize the toys, additional hangers and towels, and another package of clothespins… and then wine, matzos and chicken and meat, fruits and vegetables and oil and nuts. That’s several thousands of dollars going out of the bank account!

How do families that are financially choked manage with Pesach? A family with 12 children bli ayin hara, the mother runs a play group at home, the father learns – what kind of a chag will they have?

Just socks alone is over $50. The cheapest shoes around will cost them at least $400. And yarmulkes, shirts, tzitzis… now let’s talk about feeding that many mouths X the seven days of Pesach. You can’t put up a pot of noodles for a few dollars when it’s Pesach.

A few weeks ago, a father was discovered to have a malignant growth in the lymph node. The mother cuts down on work hours because the whole burden of running the home falls on her, and in addition, she needs to assist a sick husband. And yes, she gets a stipend of sorts from National Health Insurance for the time of the illness, but it disappears after a few minutes in the endless expenses.

Until today, they managed somehow, barely. Now they need our support! Without us, this home will have no matzos and no apples, no toilet paper and no running water!

So many poor families are waiting for our kimcha d’Pis’cha. That means “flour for Pesach,” which is what they need. Some Matzos, vegetables to put in the pot, some eggs and potato flour.

When a home is in distress, chas v’shalom, the regular daily functioning is already too complicated to handle. How does the mother of a sick child manage to clean for Pesach when she is in the hospital most of the time? How does a poor family that moved once again to an even cheaper apartment find the energy to unpack the boxes and bring Yom Tov into the tiny home?

Harav Chaim Kanievsky zatzal was so concerned about them, did so much for them! He participated in the campaigns of Vaad Harabbanim, dedicated kamios, davened for the donors, wrote berachos, was photographed for the brochure… he didn’t pay attention to his honor. He put in every effort so we will donate and support his aniyim.

Rav Chaim is looking at us from heaven, and asking us to keep taking care of the poor of Eretz Yisrael. Not to stop giving life-giving support to Jews. Not to leave them alone in the dark and out in the yard. He asks us to give them light also this Pesach!!!

Harav Chaim zatzal lefta tremendous treasure of berachos for Vaad Harabbanim’s donors, and all his blessings are good forever, as he ruled after the passing of Harav Elyashiv zatzal.

We donate, and we are zocheh to בני חיי ומזוני. We keep on giving, with all our heart, and are protected by the power of Torah and the power of tzedakah!

Pesach is approaching, with its myriad expenses and intensive preparations. On the list of endless purchases, between the puddles of soapy water and the mountains of laundry waiting to be sorted, we remember the struggling families.

Giving to our brethren is an integral part of the Chag! And Halachah clearly states that kimcha d’Pis’cha is an obligation.

It’s a little hard to imagine Seder night in the torrent of hard work that surrounds us. Another few days and we will be sitting around the beautifully set Seder table, dressed in fine Yom Tov clothing, the house clean and festive and illuminated with spiritual light.

And there, in the great hours of the miracles of Yetzias Mitzrayim, we will know that we kept up our mutual responsibilities as Jews. We are ערבים לזה לזה and we didn’t leave any Jew out in the dark with only bitter herbs.

Also the families of Vaad Harabbanim will be able to feel cheirus.

May you have a Pesach kosher v’sameach!!! 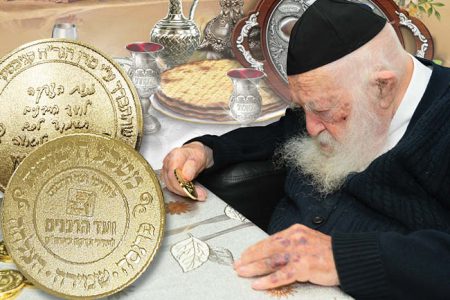 Before Harav Chaim Kanievsky passed away he wrote a personal berachah for the coin of Vaad Harabbanim that will be distributed to donors who support thousands of families in distress.

Through it they will receive this berachah, which will protect them. Rav Chaim was always a partner with all who help to relieve the most distressed, and he wrote these words of protection in order to strengthen and encourage us in our participation in this holy work. May his memory be a blessing.

“The merit of tzedakah to Vaad Harabbanim will be there for you, for zechus and yeshu’ah.”

Also the families of Vaad Harabbanim will be able to feel cheirus.

May you have a Pesach kosher v’sameach!!!